11 years prior to inventing the Tightrope, Brian Thornes was involved in a water-skiing accident; the propeller cutting his lower leg and foot, injuring tendons and nerves. The upshot was to initiate a keen interest in ankle and lower limb trauma.

Dr. Thornes’s first light-bulb moment was in 2000, for the original Tightrope construct; validated via a clinical study (n=32) in 2001-2002 with excellent results; the research winning numerous prizes for surgical innovation. Arthrex realised the potential of the device to help surgeons treat their patients better and forged an agreement to commercialize the novel implant. The first Tightrope™ was implanted in December 2004 in Dublin, Ireland.

To date, nearly half a million Tightrope units have been implanted worldwide, including many high-profile sports professionals. Numerous clinical trials have proven the clinical superiority of the Tightrope, to give the best functional outcomes and quickest rehabilitation.

The impact of osteoporosis and an aging population on trauma caseloads has been steadily increasing year-on-year. From a surgeon’s perspective, gaining anchorage in osteoporotic bone is frequently sub-optimal. Hip fractures are the commonest manifestation of this. 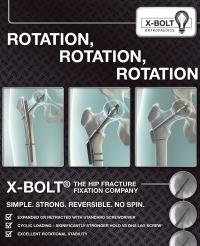 Dr. Thornes’s second light-bulb moment came in 2007; to use an expanding bolt to tackle the biggest issue in hip fracture fixation: ‘cut-out’. X-Bolt Orthopaedics was thus founded in 2007.

Ross McDonald joined the Company in 2009 and developed the portfolio, including the hip nailing system (with patented, curved Metro™ jig).

In 2012, the Company commenced a 100-patient randomized control trial versus the gold-standard sliding hip screw (WHITE1). X-Bolt had a 0% cut-out rate vs 6% for SHS, with better outcome scores at 4 weeks and 4 months.

The excellent WHITE1 results encouraged a larger multi-centre trial, WHITE4, commencing in 2016. This was to be the largest ever hip fracture fixation RCT at over 1,000 patients.

Further development work resulted in an enhanced X-Bolt design in 2019 with better ergonomics, increased fatigue strength, and manufacture in titanium. A spinal pedicle X-Bolt was also added to the portfolio.

Below are images of the original (stainless steel) x-bolt, used in the WHITE1 and WHITE4 trials.